Last we talked about dating I was seeing 3 guys: CT, BG, and Late Guy. We'll get to that in a minute. So according to The Window Shopper, The Dirty Little Secret, The Peach, The Slow Dancer, The Playboy, and possibly some other, non-blogging friends perhaps I was being a little bitchy, you know from like December to mid-March. At one point, The Peach said, "What the hell is wrong with you? You are way bitchier than normal!" Um, so, I was a little moody, perhaps not quite a stand-up-for-the-little-guy-all-inspiring-rampage a la Jerry Macguire, but still very noticeable to my friends. I'm currently chalking it up to needing more Vitamin D and a bad case of the winter blues.

CT and Late Guy largely missed this phase because, well CT was in CT and Late Guy was on a lot of business travel and was basically MIA. Don't get me wrong, I was annoyed at both of them, but since they weren't Johnny-on-the-Spot they missed the storm. Lucky them, apparently. BG wasn't quite so lucky and he became a casualty of the bitchiness.

He didn't really do anything wrong per se, but I was short tempered and cranky. Basically it boiled down to he was only getting it from me and I wasn't only getting it from him. Not only was I up front about not looking for anything serious, but I was also up front about me seeing other guys. Which he claimed he didn't have a problem with. However, I felt like I spent a lot of time soothing his ego. Which, frankly, got old really fast. If you can't handle it then fine, but don't pretend you can and then get all whiny - it's not attractive.

The last time we saw each other was ... in January. He kept pressuring me to see him, you know, because he wanted to get laid. I was working crazy hours, was exhausted, and in a generally bad mood. So, he wanted to come over one night and I didn't really want him to, but agreed to it anyway after he promised to bring me food. Hey, a girl's gotta eat. And then he kept petting me while I was trying to eat. Like. I. Was. A. Cat. Not kidding! My roommates have nicknamed him The Petter. It felt a little like this: 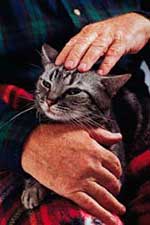 Only I think that cat is actually enjoying the petting. I wasn't. It was in the LIVING ROOM and my roommates were there and we were trying to watch a movie. Dear Lord! Also, I was exhausted and cranky. He was following me around quite a bit and sort surprise kissed me (did I mention tired and cranky?). Then of all the things to say after surprise kissing me, "Your mouth is spicy." No shit, Sherlock. I had Drunken Noodles for dinner, remember you brought it to me? (Also, seriously? Just kissing me after I had some kind-of-spicy food is too spicy for you? Really?!?!?) And then he tried to take care of me like I was a little kid, just because I was tired. That was the final straw - patience completely and totally lost. BG gets cut. 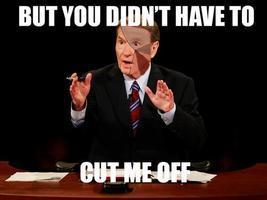 So, it's February, CT and Late Guy are both still managing to hang in there. And I started taking Vitamin D on a daily basis so my mood was getting better. I went on a ski trip to Snow Shoe - awesome place by the way. And after we got back, The Window Shopper and I went out for Valentine's Day in our annual tradition of seeing a non-romantic movie and getting some food. CT and Late Guy both managed to sneak through that holiday without messing up, although Late Guy came close.

That brings me to my dilemma with our so-called Late Guy. I think I'm pretty open minded and fair when comes to giving "you" a chance. I'm an engineer; I'm a nerd; I'm used to your ... eccentricities. For the most part. I didn't judge you by your pictures - remember I didn't look at them until after I read your profile. I really am trying to give you a fair shot, I promise. So, as Jerry Maguire would say, "Help me help you." Give me a chance to give you a chance.

Late Guy and I went on our first date in mid September. So technically we have been seeing each other for like 7 months. It hasn't gotten past kissing. "WHAT!?!?" you ask. Yeah, I KNOW. But here's the thing: he's awkward. Like really awkward. So, awkward my engineer friends are cringing at the stuff he does. First, it took him 5 dates to kiss me, that's a little slow. And there is this dichotomy to him. He seems very shy in person and then sends me crazy emails about fetishes and texts that are just weird.  Here's a smattering of texts I think are off. Now keep in mind in person we've only kissed:

So, even with these texts he hasn't been able to move passed kissing. I find that frustrating. Make a move or don't, but stop having guts only when we're not together. I feel like I'm in a ping pong match of intentions. I have no idea what to expect next. Mostly, I think he's about to get relegated to the "friend zone" because, while I like talking to him in general, this back and forth on the topic of making out is making me a little crazy.

I just want him to give me a chance to give him a chance. Stop meeting out places, I've had you drop me off. Pick me up more than once. When you drop me off, walk me to my door. I may be a 21st Century women, but don't make me feel like a slut. If you walk me to my door I might invite you in, but I'm not inviting you in from the car you haven't parked. That's too big of step, it makes me feel like you're not interested in taking the time on me. I'm not 17 anymore, making out in a car holds very little interest for me, especially if my bedroom is just over there. This is NOT happening:

If you want something to happen, get me into a situation where I can give you a chance without feeling like I have to convince you. Again, don't make me feel like a slut, I will just move on to someone who doesn't. Several guys have gotten way farther with me with what seems like a lot less effort - because I could say yes without feeling like I had to make the first move. Don't invite yourself into my bed, entice me into yours. Help me help you.
Posted by The Nurse

Email ThisBlogThis!Share to TwitterShare to FacebookShare to Pinterest
Labels: The Dirty Little Secret, The Nurse, The Peach, The Playboy, The Slow Dancer, The Window Shopper