The RN: The Makeup Experiment

So, a couple of weeks ago,  The Window Shopper and The Dirty Little Secret took me to buy some makeup. Then last weekend  The Window Shopper and I finally got around to the makeup lesson, after a crazy, fun, last-minute shopping spree. She showed me a couple basic ways to put on the makeup we bought. One for work and daytime, and one for clubs and nighttime. Then she made me put it on both ways to try it out. Most of the night I walked around looking something like this: 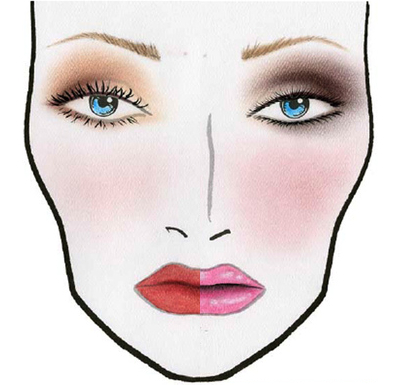 Only I think I had even more on the night half than the picture. Also, I learned pretty quickly that eyeliner and I are going to be fighting for a while, but I did commit to wearing makeup all week. Definitely can see part of why most girls take so long to get ready.

On Monday, putting on the makeup seemed to take forever, but I think I got the daytime look pretty close to what I did during the lesson. I'm not sure I know what I was expecting, but I know I wasn't expecting so many people to notice. It started as soon as I walked into work. The front desk guy asked if I got my eyebrows done. Seriously, who would have thought a guy would notice eyebrows?!?

At least 10 people commented on it on Monday. I think that means it's noticeable :(

Tuesday was a little smoother and it went on faster. A few more people noticed it and commented on it looking nice. Traitors. All of them. Wednesday was more of the same as Monday and Tuesday. I was beginning to think I was going to have to admit defeat.

And then a funny thing happen on Thursday. People started tweaking their comments a little bit. Instead of, "Wow, you look great." I started getting, "You know that makeup looks really nice, but you don't need to wear it." I must have heard that from 5 people on Thursday. Hm...

For the first 4 days, I avoided trying eyeliner. On the fifth day I wasn't supposed to have to go work (but I did have to go in anyway - damn job). So since I didn't go in until the afternoon, I decided to give eyeliner a try. It turned out okay, but I was still having issues getting it on straight. I guess I'll to keep practicing.

On Saturday, I got up at 5am and ran a 10 Miler race with The Window Shopper, The Dirty Little Secret, and The Slow Dancer. I clearly refused to wear makeup just to run a race. However, later in the afternoon The Pool Boy's Local Alumni Chapter was hosting a bar crawl, so I did some more practice with the eyeliner and managed to make my makeup look like his school colors. Which made The Dirty Little Secret a little jealous since she's an actual alumni as well and totally forgot to do school colors for her makeup. Counting that as a win :)

Then on Sunday afternoon The Window Shopper, The Dirty Little Secret, and I went out again - yeah we spend a lot of time together, deal with it. I decide since it was Sunday afternoon I could do whatever I wanted with my makeup and deliberately used stuff from the makeup bag that I hadn't used before. I'm not convinced the look worked, but whatever it was Sunday.

So after a week of wearing makeup I have come to the following conclusions: 1) that it involves a lot of face soap, 2) that it takes a lot of time, 3) that I really don't need it, 4) it has more impact when used infrequently, 5) there's no way I'm committing to doing this everyday, and 6) I'll wear it on days I'm in the mood, but I probably won't wear as much or wear it as often as some people would expect.

Email ThisBlogThis!Share to TwitterShare to FacebookShare to Pinterest
Labels: The Dirty Little Secret, The Nurse, The Slow Dancer, The Window Shopper