So I'm pretty sure 45% of the population hates this title. And at least 95% of those who don't hate it are guys. I have seen a bunch of articles lately talk about girls hating certain words. Some people have even done research on the topic. Okay, so maybe BroBible isn't the most scientific of sites, but still. The point is for the most part people are confused about why girls (and maybe some guys) hate words.


What's the first thing you think about when I say, "moist panties?" I'm going to take a not-so-wild guess and say a girl ready for someone to strip her naked and fuck her. And that's why girls hate those words, being sexualized on regular basis is exhausting. I've mentioned before how we are taught it's our job to say no, because there's this ridiculous idea floating around global society that men can't control themselves and therefore women are to blame for turning them on. Any claims about it being the sounds of words are silly, no one cares if you say hoist or aunties.

There's this inherit idea in society right now that women are sexual at all times and men are not. Case in point, it's actually working for women to paste male nipple over female nipples in pictures to keep from being "indecent". Nipples are not that different between males and females. It's absolutely crazy this is working. Female dress codes meant to cover the body so no one thinks of sex when they see it are another example. Somehow boobs are dangerous, but men walk around without shirts all the time and it's no big deal.

Nobody, men or women, is comfortable talking about what it really means to be a woman. Certain topics make people uncomfortable. Like periods, no one want to talk about periods or really even acknowledge they exist. Well except for tampon and pad commercials and even then they use blue water to show how they work. Seriously, blue water, like that's anything close what those products are designed to handle. How does blue water tell me anything about how well it's going to catch a giant clot of blood trying its best to ooze its way down my leg?

Some places are even censoring periods, like they're indecent somehow. Well I mean they are terrible to deal with and generally unpleasant. And I'm even talking about bleeding all over the place. Or overwhelming your "feminine product" (like terminology will make it safer) and leaking while still cleaning up from the last spill. Yes that happens, more often than you probably think. I'm talking about stuff like rinsing the shampoo out of your hair and getting the hair that fell out sliding down your back into your butt crack and getting tangled up with your tampon string. And then trying to get the hair untangled without pulling your tampon out, because you don't trust your body not to start spewing blood again while your dashing from the shower to the toilet to put a new one in. What? Just me on that one?

I'm talking about every 13 year-old girl knowing you soak blood in cold water because hot water will set the stain. But still having wives tell their 35 year-old husband to use cold water because they have no idea if their husband actually knows not to use hot water. Because why would a man have any idea how to get blood out of things? He doesn't have a period to deal with every month. I'm talking about sisters and friends sharing period stories about clots and blood trails with each other without blinking an eye and still not being able to broach the topic with their husbands or boyfriends because it's icky girl stuff.

I'm talking about your male roommate thinking you put a box of tampons in the downstairs bathroom so guests wouldn't have to be embarrassed by asking instead of so you didn't have to run upstairs without bleeding all over the place every time you started to feel a leak. I'm talking about feeling like you have to hide your tampon after digging it out of the secret hiding place in your desk while you walk to bathroom because God Forbid one of your male coworkers sees it and realizes you are a person and not a sex object. I'm talking about jokes like, "I don't trust anything that bleeds for 5 days and doesn't die." 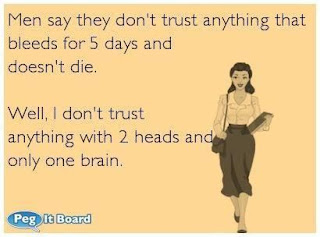 I'm talking about cunt, a term for vaginas, being generally considered the most offensive word in the English language.
Posted by The Nurse