The RN: Sorting out the Details

So, after the craziness of the last weekend in Sep I only went on two more dates in the first half of October. I was training for a Half Marathon, so I was a bit busier than normal. I also decided the boycott of OKC would last for all of October, so I'm almost ready to entertain logging back in. Besides as I mentioned at the end of the last blog I mentioned that there were 4 guys I was kind of interested in.

The first guy is Date #3 now known as Connecticut (or CT). We had a really good first date, that lasted longer than expected in a really good way. We have been texting and talking on phone (which I hate to do) since that weekend. Why haven't I seen him again? Our first date was on his last day in town before his work assignment was over and he had to go to home to Connecticut. I'm actually going to visit him in CT in Nov. Yes, our date went that well.

On the Thursday before the Half, I did manage to go a second date with Date #6, henceforth known as Baseball Guy (or BG) since our first date was a baseball game. I wasn't really sure about this guy after the first date, but I thought I'd give him a second chance. He took me to an out-of-the-way restaurant just because it was Gluten Free (yes, I generally eat gluten free, no allergies, just for my health). We had a nice dinner, but I still wasn't really sure how a I felt about him. Then I gave him a third chance the weekend after the Half. We went to the movies and then he made me dinner. Which he had to modify because of my food allergies. I had to give him props for remembering that I was allergic to some foods and then asking me about what he could put in the dinner. So even though he chose a girlie movie (yes, my friends had to talk me into being okay with seeing "Pitch Perfect"), he did make a really good a dinner and the evening progressed ... well, really well.

The third guy is Date #5 aka Late Guy. On the Tuesday after the Half we went on a third date; dinner near my place at a bar that I suggested. What I didn't know was that it was trivia night there. So we sort played along, but it was super complicated and we weren't doing that well so we didn't turn in our answer cards at all. I'm kind of on the fence about this guy. He's really nice and I have a great time when we see each other, but there's no real spark. He hasn't even tried to kiss me yet, but I have such fun and I love our conversations. I guess I'll just have to see how this one plays out. I don't want to lead him on unnecessarily, but I am still having fun seeing him.

The fourth guy was Mr. Fascinating now forever known as Fish Face. This date went about the same as the first one, the conversation was good and the food was, well, a little interesting, but still eatable. It didn't really start to go downhill until the drive back. Then somehow we got talking about superheros, which was fine with me until he started asking which ones I thought were hotter from the summer movies. Um, that got awkward really fast.

Then, after that conversation was finally over, he walked me to my door and asked to use the restroom. Which seemed a little odd since he'd already gone 3 times during dinner, but maybe something was going on with him. Anyway, then he asked for a tour, which I didn't want to give because my roommates were in bed and I didn't want to be loud and I kind of just wanted him to leave. Then the conversation got even more awkward when he wanted me to hit him in the hand. Which I really didn't want to do; seriously who wants to actually, really hit their date? Not me. Then it got even weirder and more uncomfortable when he said I must really know how to hit and that he had previously been "beaten up by a girl". At this point my only thought was, "Oh, dear god, this means drama. Get out! Get out now!" And if all of that wasn't enough this, of all the times, is when he decides to move in for a kiss. I swear he had a crazy fish face that looked some thing like this: 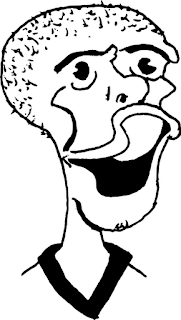 I really don't know how my entire face didn't get wet. It wasn't a terrible kiss, but by that time I really didn't want to be kissing him. I did my best to get him out the door as soon as possible after that. Thankfully he only sent one more text after that date and it didn't get anymore awkward. So he is officially off the list.

So, as of now, I have plans to see all three guys still on the list in the next 2 weeks. And I've been off OKC long enough that logging in again actually seems like it could be fun. Maybe I should let The Window Shopper and The Peach go through and screen all the guys messaging me so I don't end up on another date like that one. On the other hand, I do have three guys that I'm still talking to that I really like. At least one of which I was warned not to message back by both of them.